The head of Franz Kafka is a statue only a few years old in the centre of Prague. It is a movable metal sculpture that is constantly moving and changing. The sculpture is a good 10 meters high and since its unveiling in 2014 has been one of the most discussed works of art in the Czech Republic. 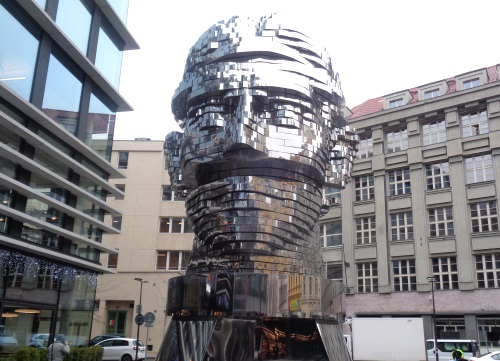 The artist who created the head of Kafka Prague is David Černý. He is known in the Czech Republic and has already created several much-discussed works of art.

The Kafka head is 10.60 meters high and weighs almost 40 tons. It is mainly made of stainless steel. It consists of 42 levels that move independently. Every few seconds the statue changes.

You can constantly see many tourists at the head of the Kafka in Prague. We think that David created Černý an interesting, modern work of art. We will probably be talking about the mobile Franz Kafka head for many years to come. Hardly any other work of art in Prague has ever generated so much echo in public, in the media and on the Internet.

Don’t confuse the new head of Kafka from 2014 with the old Kafka monument in the Old Town in the Josefov district next to the Spanish Synagogue.

Video with Kafka head in motion