Is it worth visiting Prague Zoo?

We mean yes! We liked it very much in the biggest zoo of the Czech Republic. It’s a modern, large zoo that can certainly keep up with the large zoos in Europe. There are many highlights like tropical houses, a chairlift, a cable car through the zoo, great playgrounds and other facilities for children as well as good restaurants. A visit to Prague’s zoo is still very cheap. This applies not only to the entrance fee, but also to the zoo’s gastronomy and other extras. 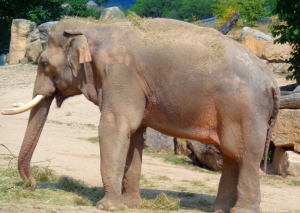 What can you see in the Prague Zoo?

It’s a big zoo. Almost all important animals of the world can be found in the zoo in the capital of the Czech Republic. All enclosures are very modern and large. A large part of the animals can be seen and photographed without a fence. We especially liked the huge elephant enclosure with Indian elephants.

As the zoo is situated on a hill next to the Vltava River, you have a good view of the surrounding area from many places, including some parts of Prague. Some paths in the zoo go steeply uphill, but they can also be easily done with a pram. You can also use a chairlift for less than one euro.

Like many zoos, the zoo in Prague is divided into continents. In total there are 700 different animal species. The classics like tigers, lions, elephants, monkeys, polar bears etc. are all present. 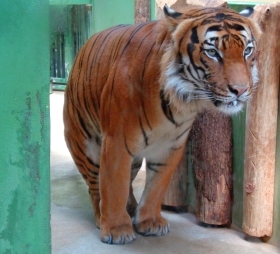 But there are also some rare animal species. For example we found the Komodo dragons interesting. These are gigantic animals, also dangerous for humans, which remind of giant lizards. They can even kill people. We also liked the Malay bears and the many salamanders. Among the birds, the monk vultures living in Asia, Spain and Greece, for example, were our favourites. In addition, there are many parrots and an aviary (large cage) with European birds, which one can enter as a zoo visitor.

A large indoor facility is the “Indonesian Jungle” with many tropical plants and animals from Southeast Asia. Penguins and sea lions are also very popular in Prague Zoo not far from the main entrance. A new building for the gorillas is currently under construction (Somme 2017). We liked the American bison and the related European bison. 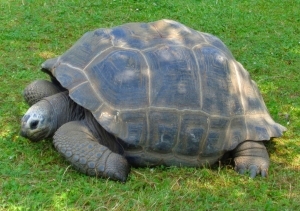 In addition to playgrounds, the Prague Zoo also has a paddling pool for children in summer. The petting zoo is also very popular with young Zos visitors. The ride through the zoo is a highlight for the younger guests of the Prague Zoo.

The following prices are from beginning 2022. Adults pay 250 Czech crowns admission to the Zoo of Prague, which corresponds to about 10 euros. The entrance fee for children from 3 years and students with student card is 200 crowns, about 8 euros. There are also fan family tickets, for example the entrance to the Prague Zoo for 2 adults with 4 children is 800 crowns (just over 15 euros). 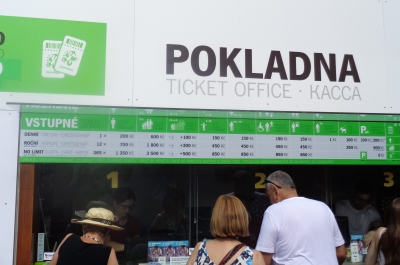 Extras are particularly cheap in the zoo.

The chairlift costs only 25 crowns (almost 1 euro) per person. Also the lift through the Prague Zoo is not much more expensive.

Dogs can be taken to the zoo, but are not allowed in many important buildings. In addition, a dog around the Prague Zoo costs extra admission (100 crowns, about 4 euros).

Prague Zoo Opening Hours 2022: The Zoo opens every day of the year at 9 am. The zoo closes at different times of the year, depending on when darkness falls. In summer (June to August) the opening hours are until 9 pm, in November to February at 4 pm. In March the zoo closes at 17 o’clock, in April, May and October at 18 o’clock. As far as we know, there are only shortened opening hours on Christmas Eve (until 14.00).

Entrances: Most visitors enter the zoo through the main entrance. The bus also stops there. There are 2 other entrances, but they are only open on weekends, holidays and school holidays in the Czech Republic.

Everywhere in Prague Zoo there are vending machines for drinks, 0.5 litres of mineral water is available for only 80 cents (20 crowns). Also a coffee or tea from the vending machine costs less than 1 Euro.

In the many restaurants and cafés, for example, one gets a goulash with dumplings for about 6 euros, a noodle dish for about 5 euros. We ate in the restaurant with the difficult name “Hostinec Gocaruv Dum” in the back of the zoo. We enjoyed it very much, the staff was very friendly,

Most drinks also cost less than 2 Euro in the Zoo restaurants. Ice cream is also inexpensive. In some places you can also buy snacks like a sandwich. Many Czech visitors bring a picnic to Prague Zoo. There are benches and tables which are very popular as picnic places in summer. Many are in the shade under trees.

How to get to Prague Zoo by car, metro, tram and bus

There are relatively large parking spaces at Prague Zoo. But they are not cheap (about 8 Euro). During the week, however, the parking spaces outside the summer and Czech school holidays cost only half as much (100 crowns, equivalent to about 4 euros).

The best way to get to the zoo is by public transport. The majority of visitors take the 112 bus from Nádraží Holešovice railway station. This station can be easily reached by underground (3 stops from the main station by line A). There are also several tram lines (Tramvaj) to Nádraží Holešovice. If you leave the subway building, the bus to the zoo is well signposted. Bus 112 runs very frequently, about every 5 minutes. The Prague Zoo is the terminus of line 112. The journey from Nádraží Holešovice to the zoo takes about 10 minutes, from the city centre it is usually half an hour to the zoo in the north of Prague. From the other side of the Vltava there is a ferry that stops very close to the zoo.

Also interesting is the zoo of Usti nad Labem, a town about 100 kilometres north of Prague.

Another big zoo in the Czech Republic is in Pilsen, about an hour west of Prague towards Bavaria.