Pilsen Plaza is a large shopping center near the city center of Pilsen in the Czech Republic. The shopping center has an estimated 100 stores and is also open on Sundays. Besides stores you can find some restaurants and cafes. Many stores are branches of international chains. Pilsen Plaza reminds us a lot of the many new shopping centers in Germany. 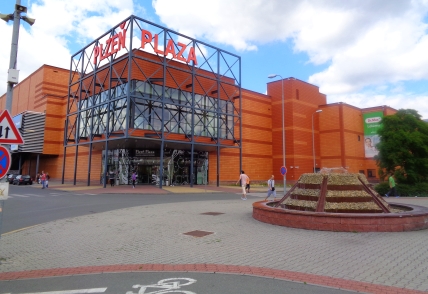 What kind of stores are there in Pilsen Plaza?

In addition, there are many Czech stores and, for example, a branch of Euronics (electronics such as TV, computers, cell phones), a pharmacy, opticians, a solarium and a large cinema. in the Czech Republic, cinemas show many films in English with Czech subtitles. 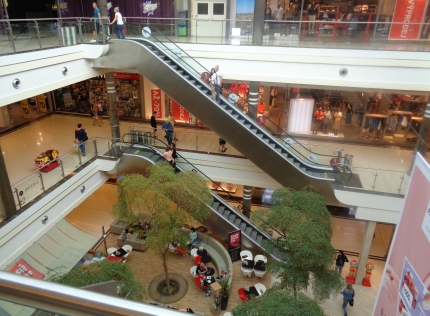 On the top of the three floors, next to the cinema, there is a food court.

Sushi: On the one hand there is a sushi restaurant. You can order from the menu or choose all-you-can-eat. In this case, you take the food from a rotating conveyor belt (kaiten-sushi, also called running-sushi). The all-you-can-eat offer costs just under 300 kroner during the day during the week (about 12 euros, as of January 2022). We tried it, it’s worth it, good quality. Name of the restaurant: Wok and Sushi. In the evening and on weekends it is significantly expensive at 500 crowns (20 euros).

Asia Food: Next door in the restaurant Panda (self-service) there is good Asian food. With a side dish (rice or noodles), main courses cost from about 4 to 5 euros.

Kentucky Fried Chicken: There is also a branch of the international fast food chain KFC in Plzen Plaza. Prices are slightly lower than in Germany.

Baguettes: You can find delicious baguettes at Bageterie Boulevard.

Juices: Frutisimo is a popular chain in the Czech Republic that offers healthy juices, smoothies and ice cream, among other things.

These are just examples. There are other restaurants, cafes and ice cream shops that offer ice cream in scoops and soft ice cream, which is popular in the Czech Republic. You can also have a beer at a reasonable price in the Pilsen Plaza shopping center.

How do I get to Pilsen Plaza?

Across the street is a very popular pub that is always busy. Irish pub “Zach’s pub”. It is also good address for live music in Pilsen. Many students, it’s easy to get into conversation.

Plzen Plaza has very simple opening hours. Stores are usually open every day, including Sunday, from 9am to 9pm (so easy to remember from 9 to 9).

Of course, some stores and service providers may have different opening hours (like the cinema or catering establishments).