The Prague Town Hall in the centre of the Old Town is one of the biggest tourist attractions in the capital of the Czech Republic. Next to the Prague Castle and Charles Bridge, the Old Town Square with the Town Hall is one of the 3 top sights of Prague. Particularly popular are the astronomical town hall clock, a visit to the inside of the town hall and a walk up the tower.

>>> Here you can buy tickets for the Prague Town Hall on the Internet.

The town hall, the famous astronomical clock at the bottom right of the building

The Old Town Hall was built in the 14th century, first the building and a few decades later the Town Hall Tower. The famous clock dates from around 1410, but it was often rebuilt and extended later. The clock is regarded as one of the greatest technical works of the late Middle Ages. Many say it is the most famous clock in the world and today an absolute tourist highlight. 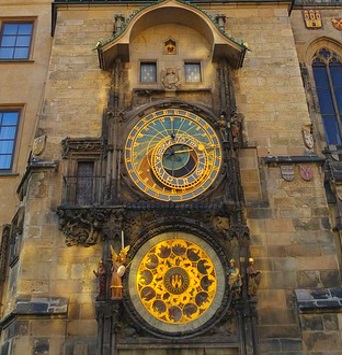 The astronomical clock shows not only the time in different forms, but also the position of the sun, the moon phase, the position of the moon, the date and much more. At every full hour during the day, various figures dance above and beside the clock to the chime of the bell. On the hour a large number of tourists come to the clock on the town hall wall to watch the centuries-old spectacle. 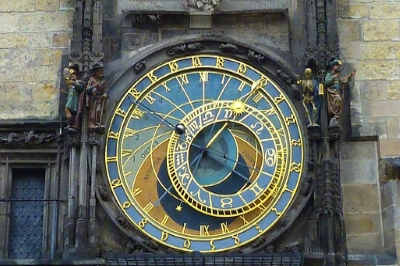 The passage to the tower and the inside of the building is subject to a fee. From the top, one has a good view to the famous town hall square and large parts of the old town, it is worth it: 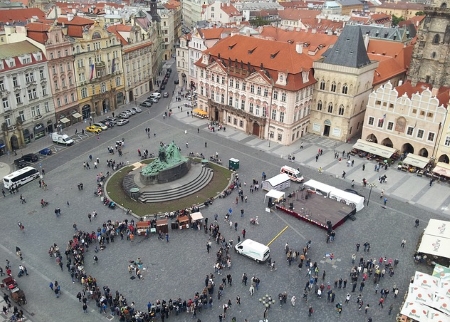 The interior of the town hall is also interesting (such as halls, ceilings, works of art).

Tickets for visiting the tower and the interior of the building are available on the Internet on this link. The town hall clock was renovated from 2017 to mid 2018 and was not visible to the public. Now you can see the world famous astronomical clock in its full glory again.

>>> Here you can buy tickets for the Prague Town Hall on the Internet.

The interior and the tower are open every day from 9 am to 10 pm. The Astronomical Clock is outside the Town Hall and can be viewed at any time. The figure game on the hour is only during the day.