Karlovy Vary is one of the most famous spas in Europe. The city with just over 50,000 inhabitants is located in the north-west of the Czech Republic.

The border with Germany, both Saxony and Bavaria, is not too far away.

There are mainly two groups of guests coming to Karlovy Vary. One is the spa guests, who usually stay for many days or even several weeks. The others are tourists who are interested mainly in the sights of Karlovy Vary.

Karlovy Vary became a spa town because of its hot springs. Nowhere in Central Europe are there so many thermal springs. The healing effect of the hot water (most of the Karlovy Vary springs are 50 to 80 degrees warm) has been known for more than 500 years. You can drink the warm mineral water or bathe in it (drinking cures or bathing cures).

Beautiful buildings were erected over some springs in the center of Karlovy Vary. These buildings are called colonnades. They are mostly freely accessible. Every visitor can drink the hot mineral water free of charge. Those who do not have a cup with them can buy one at many stands.

The colonnades are one of the absolute top sights of Karlovy Vary. Especially impressive is the huge Mill Fountain Colonnade with 5 thermal springs of different temperatures.

>>>> Our article about the colonnades 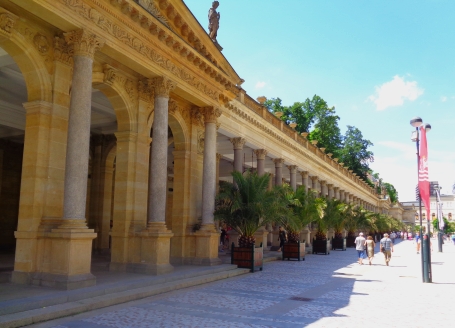 At each of the springs there are signs with the name of the spring and the temperature. Very beautiful is also the market colonnade, which is not far away. Since it is made of wood, it is also called the wooden colonnade.

From the source of the fountain colonnade water flows in a very high pressure. The geyser (the fountain) is almost 12 meters high.

Karlovy Vary was and still is one of the most important spa resorts in Europe. Also in the past many kings, other noblemen, high politicians and very rich people came to Karlovy Vary. Many luxury hotels were built. The most famous hotel in the Czech Republic is the Hotel Pupp and is located in the center of the spa. 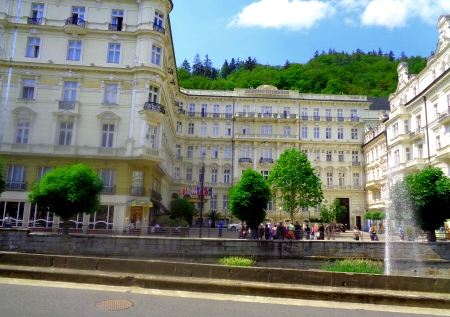 Also very famous is the Imperial Hotel. However, there are also a large number of ordinary hotels and guesthouses in Karlovy Vary at reasonable prices.

Two churches in particular are an absolute must-see. One is the Church of Mary Magdalene behind the Market Colonnade. It was built in the 18th century. One of the highlights among the sights of Karlovy Vary is the beautiful Orthodox Church of Saint Peter and Paul. Especially the many Russian guests in Karlovy Vary love “their church”. 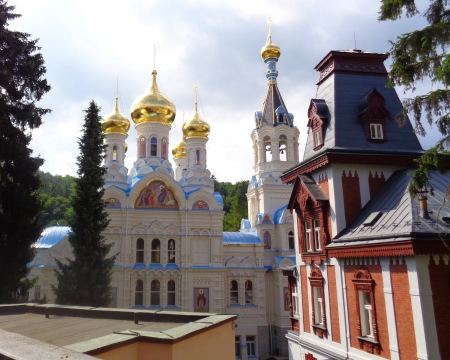 Not far from the very posh Hotel Pupp is the bottom station of a small cable car that takes tourists up to the Diana Tower for 80 crowns (about 3 euros, year 2017). The funicular ride is popular mainly because of the magnificent view of Karlovy Vary from the top. The ride to Diana Tower takes only 3 minutes (departures about every 15 minutes in both directions). >>> More information 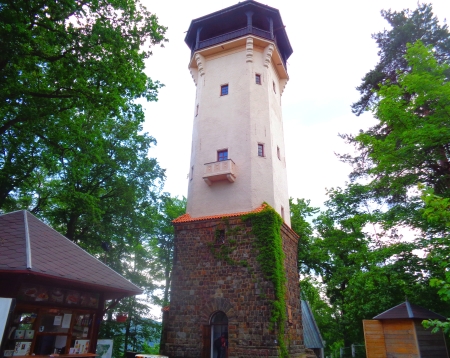 Karlovy Vary is home not only to the famous medicinal water, but also to one of the most famous herbal liquors in the world, Becherovka. The more than 200-year-old recipe of the liqueur, which remains a secret to this day, was created by Jan Becher, a pharmacist from Karlovy Vary. The liquor of Karlovy Vary is offered everywhere in the city. The Becherovka Museum (or Jan Becher Museum) in the center of the city is one of the great sights in Karlovy Vary. The entrance fee is between 4 and 5 euros in 2017, you can taste the favorite drink of many Czechs for free in the museum. In a store in the building you can buy the liqueur.

Moser Glassworks in Karlovy Vary is perhaps the most famous glass manufacture in the world. No glass brand in the world has a better reputation. Kings and other high nobles throughout Europe and on other continents have been drinking from Moser glasses for a long time. For example, high-quality wine glasses, shot glasses and champagne glasses are produced, as well as larger vessels such as fruit bowls, etc. One can visit the Moser Glass Museum with several thousand exhibits. In addition, there are also tours of the production. These are very interesting, as far as we know you have to book in advance. The Moser company is located about 2 kilometers west of the center of Karlovy Vary.

The city and the parks

For many visitors to Karlovy Vary, it is not the individual sights that are the highlight, but the city itself. The location of the city center in the valley is beautiful. The Tepla River flows through the valley and joins the Cheb River at the northern end of the center of Karlovy Vary. Many hundreds of houses from past centuries have been lavishly renovated since the end of socialism. 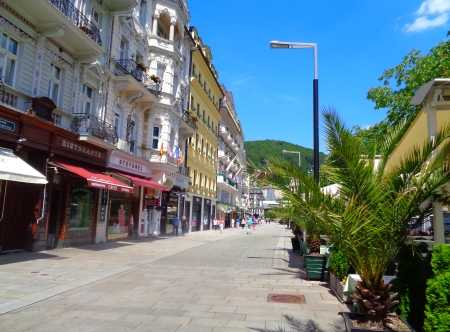 Karlovy Vary is rightly considered one of the most beautiful cities in Central Europe. In addition, the spa guests like the many large parks. Also in the city center you can find large, beautiful green areas. Around the city of Karlovy Vary there is a lot of forest, mountains and a large network of hiking trails. It is an ideal spa town.