The John Lennon Wall in the centre of Prague is a very famous graffiti wall. It already existed in the last years of socialism in the former Czechoslovakia in the 80s. The wall was then a medium for freedom of expression, people who painted the wall and described were fought by the state power. 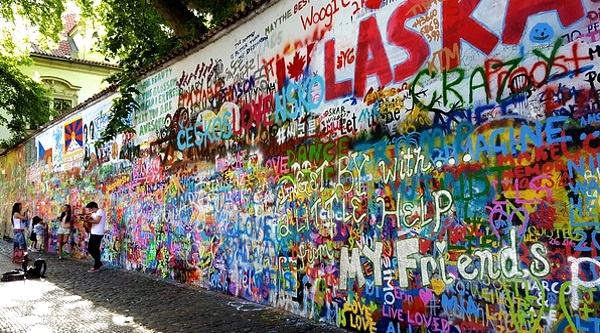 The John Lennon Wall in Prague

In 1988 and 1989 there were several serious clashes between young people who described the wall and the police. On the nearby Charles Bridge there were riots. The young people called themselves “Lennonists” (pun with the word Leninists). They wanted freedom, love, peace and the end of communism.

The Wall has survived to this day. It was painted white several times, only a few days later it was painted and described again and again.

Today the Wall is above all a meeting place for young people from all over the world. In summer hundreds of people are always at the John Lennon Wall in Prague during the day and in the evening. It is a great place to meet people. Most people on the Wall are tourists today, many from Asia. 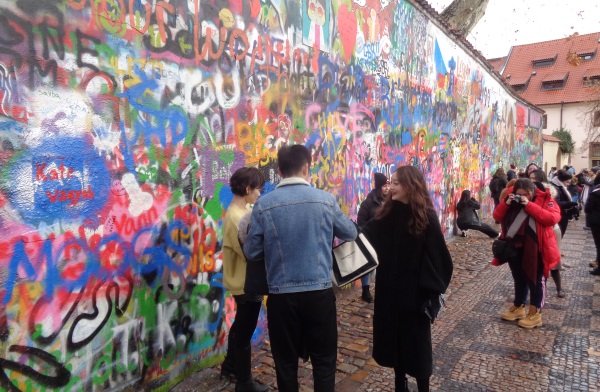 The John Lennon Wall in January 2019

The wall is the boundary of a garden of a church. In the meantime there is even a souvenir shop in the garden with the theme John Lennon Wall. Many young people sit on the ground in front of the wall, there are many spontaneous parties and the like.

John Lennon was a member of the Beatles and was murdered in 1980 at the age of 40. He was a champion of peace, freedom and love. Among other things at the beginning of the 80s many Beatles lyrics and portraits of John Lennon were written at the John Lennon Wall in Prague.

Interesting short film with a lot of further information: