Although there are no very high mountains in Prague, there is still a short cable car to the popular Petrin Hill. At the top is a famous observation tower Prague, an observatory, a labyrinth and much more (more info Petrin Hill).

The cable car starts down in the middle of the city at a tram station. The tram stop is called Ujezd and is served by the lines 1, 9, 12, 14, 15 and 20. The footpath between the tram and the cable car station is less than 100 metres.

On foot you can reach the valley station of the cable car well from the Lesser Town, the central part of the town on the other side of the Vltava seen from the centre. For example, from Kampa Island or the John Lennon Wall it is not too far on foot to the funicular to Petrin.

The train runs every 10 minutes in summer and every 15 minutes in the rest of the year. There are about 20 seats and about 80 standing places. 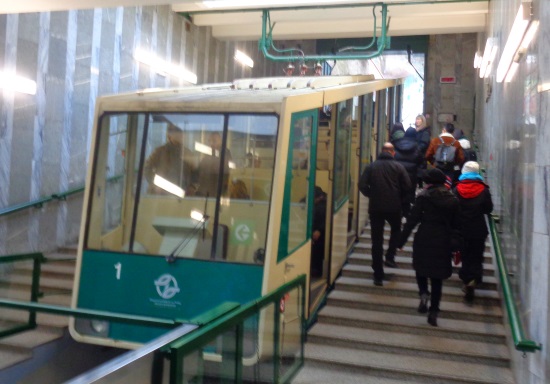 If you drive to the very top, you can easily walk from the top station to the observatory Petrin (only a few meters) and to the famous observation tower Petrin (about 200 meters).

The cable car is a normal means of public transport, no special ticket is required. If you have a day ticket, weekly ticket, monthly ticket, annual ticket, etc. for the Prague public transport system, you do not need an extra ticket. If you have a single ticket, for example because you arrived by tram, you can also use the only cable car in Prague if it is still valid. There are single tickets for 30 minutes or 90 minutes. The time must not have elapsed before getting off at the top station. There was no ticket control during our trip.

If you do not have a valid ticket, you can buy tickets at the bottom station. This costs 24 crowns (just under 1 euro) for a one-way ticket. If you also want to go back, it is best to buy 2 tickets.

As far as we know, the cable car runs from 9 am until 23:20 pm. Departures are every 10 minutes in summer and every 15 minutes in winter. The two lifts hang on a rope. So the train goes down and the train goes up at the same time.

In Czech the railway is called: Lanová dráha na Petřín

In English, for example, there are the designations: Funicular Railway to Petrin Hill Prague, Petrin Cable Car or Petrin Funicular

It is a funicular railway. 2 trains are connected by a long steel cable. The line is largely single-track, only in the middle at the meeting point of the two trains there are 2 tracks for a short section.

The length of the cable car to the Petrin is only 511 meters. A height difference of 130 meters is overcome. The maximum gradient is about 30 percent. The Petrin cable car can transport up to 1400 people per hour. The travel time, without stops at the middle station, would be about 150 seconds.

The cable car exists since 1891, since 1932 it is electric. In 1965 there was a severe landslide on the Petrin mountain. The tracks were heavily destroyed. It was not until 20 years later that the cable car was modernised and put back into operation in 1985.