The Dancing House Prague is an office building built more than 20 years ago south of the centre of Prague. The architecture of the building is so unusual that the house is now visited by hundreds of tourists every day and is now one of Prague’s top 20 sights. 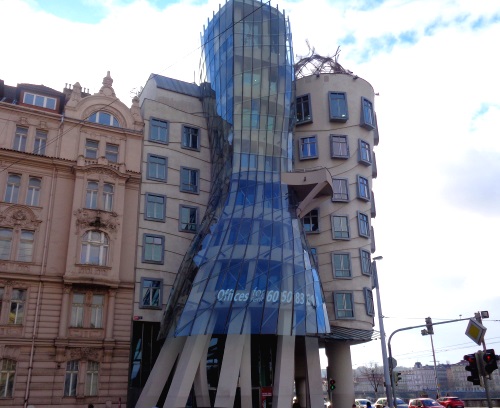 The Dancing House in Prague

The house is reminiscent of a lady in a dress leaning against a gentleman. It could also be a scene from a dance, hence the name Dancing House. It is only a nickname, the term Dancing House does not come from the architect Milunic.

Today there are some international companies and a hotel in the building, which of course is called “Dancing House Hotel”. Some people also call the Dancing House Prague “Ginger and Fred” (by Ginger Rogers and Fred Astaire). In the upper floor of the Dancing House there is a high-quality restaurant called “Ginger & Fred”.

Several tram lines stop almost directly in front of Dancing House. From the Old Town of Prague (Central Square Prague) you walk about 20 minutes to the Dancing House.

You can see more in a short film than in photos: