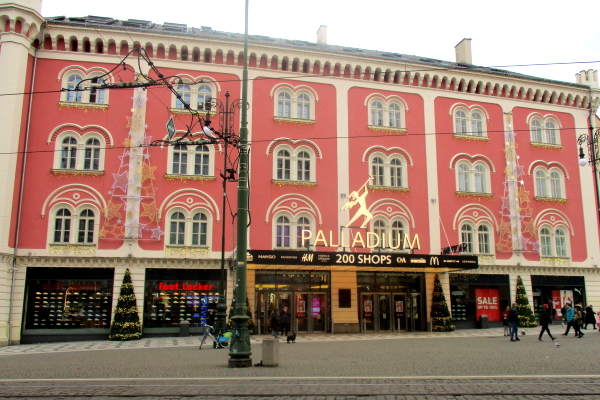 Palladium shopping center is located directly on Republic Square (Czech: Náměstí Republiky) in the New Town of Prague. The New Town is one of the 4 parts of Prague city center (along with Old Town, Lesser Town and Prague Castle).

There are about 30 restaurants and cafes in the Palladium. On the 2nd floor is a large food court with Mc Donalds, Pizza Hut, KFC, Burger King, Nordsee and several other restaurants with e.g. Asian, Italian and Czech cuisine. In addition, there are cafés in the Palladium such as Starbucks, which also offer cakes, etc.. 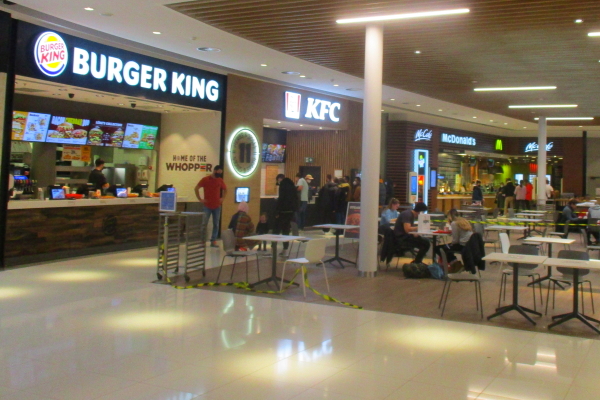 Next to it there are 2 basements, the ground floor and the 1st floor. Here are the many stores. For example, at the bottom is a large supermarket of the Albert chain and a DM drugstore. Among the fashion stores and fashion chains in the Palladium that are also known in Germany are C&A, H&M, Marks&Spencer and The North Face. Many brands such as Adidas, Puma, Calvin Klein, Armani, Hugo Boss, Gerry Weber, Lacoste, Superdry and Vans have some stores. There are several shoe stores, including Foot Locker and Deichmann.

In addition, as in most large shopping centers, there are also stores for jewelry, leather goods, sports, electronics and cell phones, health, gifts, sweets and quality food, opticians, household goods and much more.

One can also find a pharmacy, ATMs, a casino, banks, etc. in the Palladium shopping center in Prague.

The name Palladium comes from the metal palladium. It is one of the most expensive metals in the world, even more expensive than gold.

There is a noticeable number of foreign tourists coming to Palladium Prague. Many of them are from overseas. For example, the Czech Republic is considered one of the cheapest countries in Europe in the USA, Asia and Australia. In fact, we saw many things in the Palladium shopping center that are cheaper than in Germany. However, this is by far not true for everything. Nevertheless, even as a German in the Czech Republic you can buy one or the other thing cheaply. Even branded products, clothing, jewelry, bags and shoes can be a bargain.