A very special exhibition in Pilsen (Plzen) is the Puppet Museum right in the center of the city on the main square Namesti Republiky (Republic Square). The topics of the interesting museum are mainly theater puppets and the history of puppet theater and puppetry in Pilsen. 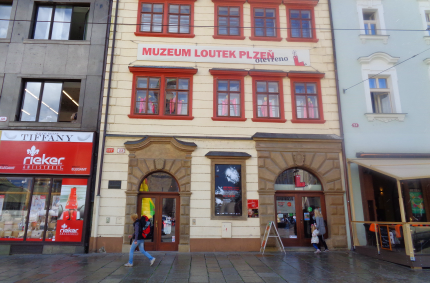 What is a puppet show?

Pilsen has been known for the puppet show for over 200 years. In a puppet show, which is performed in a special theater, moving figures take the roles of actors.

These movable puppets or marionettes are moved in the background, usually invisible to the audience, by people with strings. In the 19th century, puppet theater was better known than it is today.

Puppet theaters roamed the country as traveling theaters, comparable to a small circus. Some of such groups came from Pilsen. Later, there were also permanent puppet theaters in Pilsen. Throughout Central Europe, the city of Pilsen was famous for its performances with puppets. In Germany today, mainly through the medium of television, the puppet theaters in Augsburg (Augsburger Puppenkiste) and Wuppertal (Wuppertaler Puppenspiele) are well known. However, puppet theater was not only for children in the past, even difficult plays, such as the tragedy Faust by Goethe, were performed in puppet theater.

What can you see in the Pilsen Puppet Museum?

The museum consists of three floors and is one of the most important sights in Pilsen. The exhibition is arranged chronologically. On the first floor, the beginnings of puppet theater around 1800 are presented, and further up, objects from the more modern puppet theater. You can see many historical marionettes and other puppets.

Great in the Puppet Museum Pilsen are the two automatic puppet theaters. By pressing a button of the museum visitor a curtain opens. A small performance follows. We also found the films about the history of the Pilsen Puppet Theater exciting, which you can watch in German as an option. The most beautiful thing in the Pilsen Puppet Theater for us were the many puppets, some of which were more than a meter tall. Especially the older, historical puppets, whether king, Kasper or devil, we found very interesting.

By the way, almost all texts, descriptions and films in the Pilsen Puppet Museum are in three languages (Czech, German, English).

How much is the entrance fee to the Pilsen Puppet Museum ?

One of the most beautiful things in the Czech Republic is the usually low entrance fees to museums. This is also true for the Museum of Dolls in Pilsen. Adults pay just 100 crowns, about 4 euros, for admission. (As of Januar 2023)

For children, who usually have a lot of fun in the puppet museum, you pay only half (30 crowns, a little more than 1 euro). Families pay a maximum entrance fee of 150 crowns (5.70 euros). The staff in the Doll Museum Plzen is very nice.

The museum is open daily except Monday from 10 am to 6 pm.

Address: Náměstí Republiky 23. Republic Square is the central square of the city of Pilsen. It is one of the largest city squares in the whole Czech Republic.

Our article about the Puppet Theater Prague

The ancient theater Pompeii, one of the most important buildings of the world-famous excavation.