Diana Tower is a small observation tower on a mountain above Karlovy Vary in the Czech Republic.

You can walk up or take a cable car. The Diana Tower itself can be reached by stairs (150 steps) or by elevator. Next to the observation tower there is a restaurant, a kiosk, a small zoo, a playground for children and the famous butterfly house.

The cable car to the Diana Tower

The train to the Diana Tower in Karlovy Vary is a so-called funicular or track cableway, i.e. a cableway on rails. The mountain is so steep that a normal railroad or a rack railroad is technically not possible. The Diana Railway consists of two cars connected by a rope. When one car is at the top of the mountain, the other is in the valley. During the ride, the two cars meet at the middle station. In Czech the railroad is called “Funicular”. 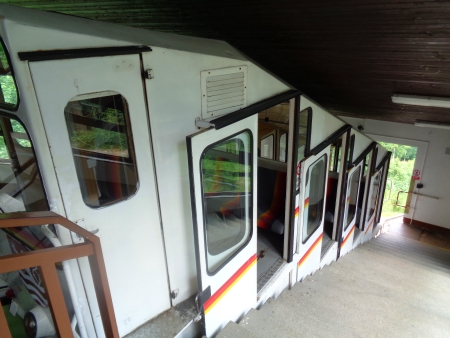 How to find the Diana lift in Karlovy Vary: The bottom station is less than 100 meters from the Pupp Hotel in the center of Karlovy Vary. If you are in front of the hotel, turn right and take the next street to the left (Marianska street). After a few meters you will be in front of the Funicular station (Diana cable car).

Fare of the Diana cable car: Like many things in the Czech Republic, the cable car of Karlovy Vary is still very cheap. Adults pay 150 crowns (about 6 euros) round trip in 2023. If you want to walk a distance, the price for the cable car to Diana Tower is even only 100 crowns (about 4 euros in 2023).

Children from 6 to 14 years even pay only about half, there are inexpensive family tickets for the cable car and some other discounts for groups or disabled people, for example. Payment is only possible in cash in Czech crowns, no credit cards or similar (as of 2019). You can also take a bike or a dog for a small fee.

Opening hours of the cable car to Diana Tower: the first train departs in the morning all year round at about 9 am. After that, departures are every 15 minutes. In the evening, the service closes at 7 pm in summer, and at 5 pm in winter due to early darkness. In the transition months of April and October, the funicular runs until 6 pm (as of early 2023).

On foot to Diana Tower: There is a nice hiking trail up through a forest. It is quite steep going up, there are more than 160 meters of altitude to overcome. If you are fit, you can make it to the top in half an hour.

When you reach the top station of the funicular Diana, it is only a few meters to the Diana Tower. Since you are standing in the middle of the forest, you only get a good view down to Karlovy Vary when you walk on the tower because of the trees. We found it great that the Diana Tower does not charge an entrance fee. You can take the pullout up the tower as well as walk up a flight of stairs. We counted the steps: There are exactly 150 steps.

At the top, you can walk around the Diana lookout tower on a circuit. You can see large parts of Karlovy Vary from the top, including the spa district, many fancy houses, and other things in the surrounding area, especially mountains and forest.

A beautiful view and of course a great opportunity to take photos. If you have binoculars, you should take them with you.

A few steps further is an excursion restaurant. In the summer you can also sit outside in a beer garden. We found the food good. The prices are rather in the upper range for the Czech Republic, as almost everywhere in Karlovy Vary. However, compared to Germany or Austria, the Diana Restaurant is inexpensive. 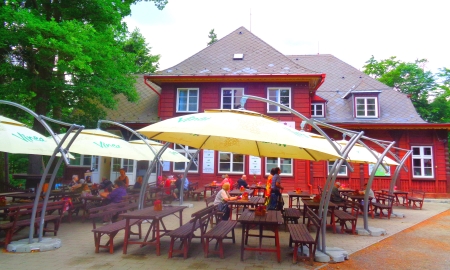 A schnitzel costs about 6 euros, a knuckle of pork about 11 euros. You have to pay extra for some of the side dishes in the restaurant near the Diana Tower in Karlovy Vary (potatoes, French fries, Czech dumplings, rice, etc. about 1.30 euros).

A few steps further you come to another small sight, a small zoo, which is especially interesting for children. The mini-animal park does not charge an entrance fee. You can see mainly farm animals, which include very small horses (Shetland ponies), pigs, goats and a peacock. 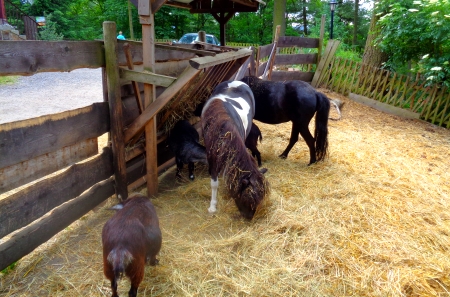 There is also a nice children’s playground behind the restaurant.

This is the only attraction on the area around Diana Tower for which you have to pay an entrance fee. The entrance fee to the Butterfly House is 80 crowns (about 3 euros) for adults (children pay 40 crowns). In the butterfly house about 30 species of butterflies fly around freely. Most of the butterflies come from the tropics (for example Thailand, Mexico, Brazil). The largest animals have a wingspan of about 20 centimeters.

By the way, there is also a very famous butterfly house in Vienna: More info from this link

Also in Prague there is a similar butterfly house: See our article Butterfly House Prague

Overview of sights in Karlovy Vary