Prague Letna is the district north of the Old Town on the other side of the Vltava River. Lenta (Czech Letná) is known for a large park, on a slope and on a hill. In the middle of the park stands a famous modern work of art, the metronome Prague. Another important sight is the National Czech Museum of Technology. The Letna Beer Garden is probably the most famous open-air restaurant in Prague.

How to get to Letna: It is easy to walk from the centre, you are about 15 minutes away from the central square of the Old Town, the Old Town Square. You simply walk up the boulevard Pařížská (Pariser Straße) to the right of the large church on the square (St. Nicholas Church).

Pass the Old New Synagogue and cross the Vltava River (Čechův most, Cechuv Bridge). On the other side of the bridge you stand in front of a slope with a park, that is Letna. You go up the wide steps and after 3-4 minutes you stand on a large square. Here is the first sight, the Prague Metronome.

From 1955 to 1962, the largest Stalin monument in the world (15 metres high) stood on the site of today’s Prague Metronome. However, the person of Stalin was already viewed very critically in Czechoslovakia in the years after its completion. In 1962, only 7 years after completion, the army blew up the Stalin monument. 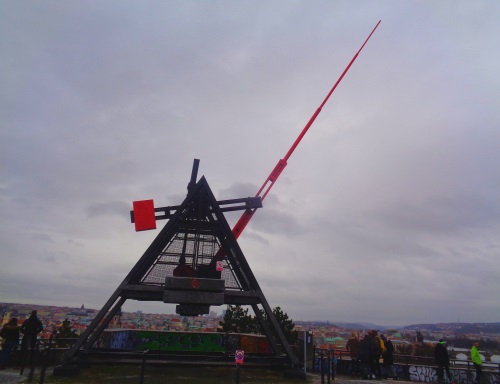 After the fall of communism in 1989, the aim was to create something new on the site of the former Stalin monument. In 1991 the great work of art Metronom by the artist Vratislav Karel Novák (died 2014) was erected. The metronome can be seen from parts of Prague’s Old Town.

A metronome is a clock in music. The oversized metronome in Prague is supposed to remind us of such a device. The height of the pointer is gigantic 25 meters. It is electrically driven. In Letna Park you can see the work of art from a few meters away.

The park is partly on the slope above the Vltava and partly a plateau at the top of the hill. It is one of the largest parks in Prague. There are many paths, benches, playgrounds for children and much more.

From Letna Park you have a good view over the Vltava River and parts of downtown Prague.

The large beer garden is probably the best known in Prague. It is located at the eastern end of Letna Park, not far from the National Museum of Technology. In summer the beer garden in Letna is often overcrowded. You can also go shopping at the kiosk or bring a picnic and sit in a meadow next to the beer garden. The cool beer in the Letna beer garden tastes great in summer. From here you also have a great view over the river and the city centre.

Almost next to the beer garden is the Czech National Museum of Technology, one of the largest museums in Prague.