The Pinkas Synagogue is one of the many old Jewish sights in the former Jewish district of Josefov in the Old Town of Prague. The rather small building is located next to the well known Old Jewish Cemetery. Almost all tourists who visit the synagogue buy a combined ticket for all important sights in Josefov (more info). The Pinkas Synagogue is known for a list of almost 80,000 names on the interior walls. They are names of Jews who were deported to Czechoslovakia during the Nazi period and who were largely murdered by the Nazis.

In the Pinkas Synagogue almost all walls are described with a list of names, a total of about 78,000 names. They are names of Jews from Czechoslovakia who died during the Nazi period. Most of them were murdered in concentration camps. 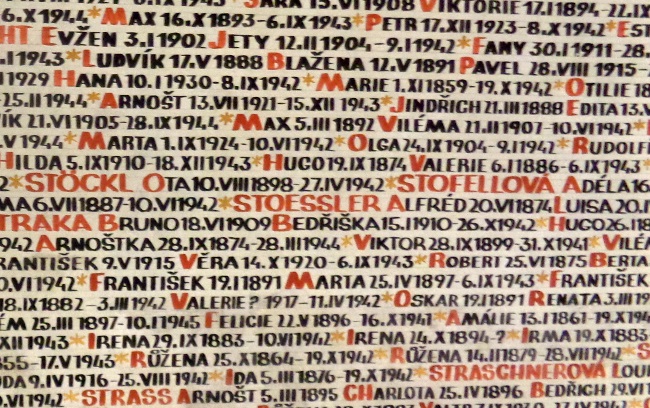 The surname is written in red like the first letter of the first name. In addition, the date of birth and the days of deportation or murder are indicated in black. The list of Jews in the Pinkas Synagogue is sorted by surname and place. In addition, the names of the victims of the Holocaust are read out over a loudspeaker. Most of the walls of the Pinkas Synagogue were used to write the many names in small letters. Visitors can feel what a gigantic crime the genocide of the Jews was in the Nazi era.

The single-nave Pinkas Synagogue dates from the 16th century. The building was paid for and built by the rich Jewish family Hotowitz. Often in the 500-year history of the synagogue, the building had to be renovated. The names of the victims of National Socialism were handwritten on the walls between 1954 and 1959. The inscription was heavily damaged by moisture in the 60s and 70s, and during socialism the Pinkas Synagogue was closed to the public for a long time. After the fall of communism, the synagogue was renovated, and since 1995 the lists of Holocaust victims have been open to the public again.

We were very impressed by the visit to the Pinkas Synagogue with its long list of names. After the synagogue, visitors come directly to the Jewish cemetery. In the back garden of the synagogue you can have a look at a small exhibition with information about the Holocaust in the Czech Republic.