Hardly any of the world’s great writers is as connected with a city as Franz Kafka is with Prague. It is logical that this must happen in Prague: A Franz Kafka Museum.

The Kafka Museum is seen from the city centre on the other side of the Vltava River in the Mala Strana district directly on the river bank.

You walk from the old town over the old Charles Bridge, then turn right and you are at the entrance in 5 minutes.

In the Kafka Museum Prague you can find many things. These include the first editions of many of his books. You can also see original letters from Franz Kafka, his diaries, manuscripts, pictures, drawings and much more. The whole thing is presented in a modern multimedia way, with light, music and so on.

The entrance fee to the Kafka Museum Prague is about 8 euros (200 crowns). There are discounts for students, seniors, disabled people, etc. (almost 6 euros, 120 crowns).

The opening hours are quite simple: the museum about Franz Kafka on the banks of the Vltava River is open daily from 10 am to 6 pm.

Opposite the museum there is a museum shop with books about Kafka and much more like postcards, souvenirs, etc.

Franz Kafka lived from 1883 to 1924, so he was only a little over 40 years old. He had been ill with tuberculosis for years before his death. He died on a cure in Austria. Among other things Kafka wrote stories and short stories in German. Important works include “Der Prozess”, “Die Verwandlung”, “In der Strafkolonie” and “Das Urteil”. Franz Kafka is one of the top 10 authors in the German language of all time. He spent most of his life in Prague.

More sensation in Prague than the museum itself caused for some time in Prague a work of art in front of the museum. It shows 2 peeing men and is by the famous Czech scandal artist and action artist David Cerny. 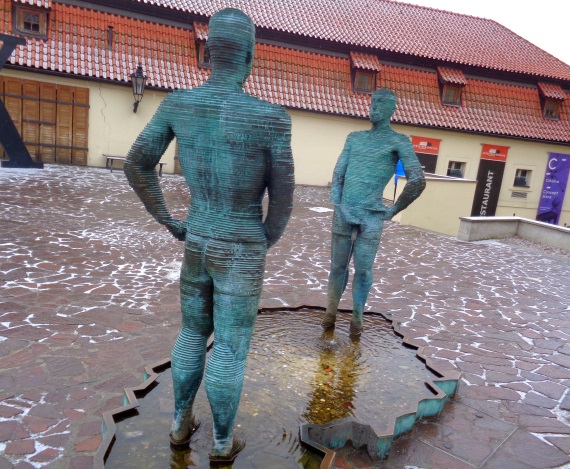